The typical denominational view of both Father and Son is that "God is love," and only love. What is so easily forgotten is His severity (Romans 11:22) and wrath (II Thessalonians 1:3-10). Jesus is depicted as quiet, soft-spoken, harmless, almost a wimp (nothing could be further from the truth). The consequence of this one-sided view of Jesus is that while many believe in Him, they no longer fear Him. Yet, Jesus taught that we are to fear Him, "And do not fear those who kill the body but cannot kill the soul. But rather fear Him who is able to destroy both soul and body in hell" (Matthew 10:28). This tolerant, inclusive, non-condemning Jesus will accept just about any scheme that man will devise or any form of worship so long as it is offered in sincerity. But Jesus said, "Many will say to Me in that day, ‘Lord, Lord, have we not prophesied in Your name, cast out demons in Your name, and done many wonders in Your name?’ And then I will declare to them, ‘I never knew you; depart from Me, you who practice lawlessness!’" (Matthew 7:22-23). Clearly, the ideas that many have about deity are contradicted by the scriptures.

Sadly, this political correctness has crept into the thinking of many Christians, including some who occupy pulpits and are entrusted with the leadership of congregations. For many the motivation is clear, a "cleaned up" Jesus who preaches a "cleaned up" gospel is less offensive and will attract more people. But man’s desire for God to be different than what He actually is does not make it so.

Truths That All Bible Believers Recognize

God is love. This is clearly stated in I John 4: 8, 16. His love for man caused Him to send His Son to die on the cross as a sin sacrifice (John 3:16), while man was an enemy (Romans 5:6-10). Truly, this degree of love is incomprehensible. But the forgotten side is that "the Lord your God is a consuming fire, a jealous God" (Deuteronomy 4:24). These are not conflicting ideas, the two sides make a whole.

God wants all men to be saved. "For this is good and acceptable in the sight of God our Savior, who desires all men to be saved and to come to the knowledge of the truth." (I Timothy 2:3-4). While God offers salvation to all mankind (Titus 2:11) the majority will reject His offer, and God will destroy them (Matthew 10:28; II Thessalonians 1:9).

God is no respecter of persons. The promise made to Abraham (Genesis 12:1-3) extends to all the nations of the earth. That promise is fulfilled in Christ (Galatians 3:16). Though Christ and His disciples preached primarily to "the lost sheep of the house of Israel" (Matthew 10:6), God’s plan after Jesus ascended was that the gospel be preached to all men (Matthew 28:19-20; Acts 10 & 11; Ephesians 2:11-16). While salvation is extended to all without partiality, only those in the Lord’s church have accepted the offer (Acts 20:28). All others are lost.

The Side Of Jesus That Is Often Ignored 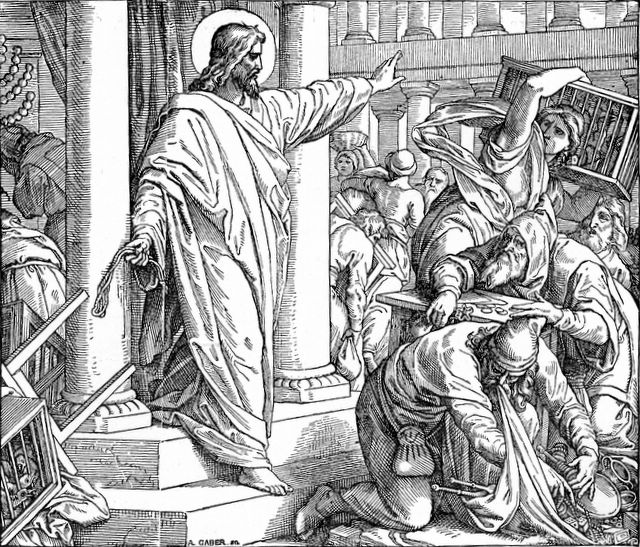 Jesus Was Intolerant Of Sin And Those Who Promoted It. Much of His time on earth was spent exposing and condemning the sins of the Jewish leadership. He warned His disciples, "Take heed and beware of the leaven of the Pharisees and the Sadducees" (Matthew 16:6). Initially the disciples didn’t understand His words. But after Jesus explained, "they understood that He did not tell them to beware of the leaven of bread, but of the doctrine of the Pharisees and Sadducees" (Matthew 16:12). His language in Matthew 23 is among the strongest in all the Bible. He referred to the Scribes and Pharisees as "hypocrites," "serpents," "brood of vipers." He described them as "full of extortion and self-indulgence," "full of hypocrisy and lawlessness." He said that they, "devour widows’ houses, and for a pretense make long prayers." He was intolerant of those who rejected Him after seeing His miracles, "Woe to you, Chorazin! Woe to you, Bethsaida! For if the mighty works which were done in you had been done in Tyre and Sidon, they would have repented long ago in sackcloth and ashes. But I say to you, it will be more tolerable for Tyre and Sidon in the day of judgment than for you" (Matthew 11:21-22). Jesus was intolerant of those who set aside God’s law to follow human tradition (Matt. 15:3-9). He did not tolerate "false christs" and "false prophets" (Matthew 24:24). He told the Sadducees that they were "mistaken, not knowing the Scriptures nor the power of God" (Matthew 22:29).

Jesus’ disciples followed His example of intolerance. The early church did not tolerate the sin of Ananias and Sapphira, they were struck dead (Acts 5:1-11). When the judaizing teachers came to Antioch, "Paul and Barnabas had no small dissension and dispute with them" (Acts 15:2). When these same false teachers tried to compel circumcision Paul "did not yield submission even for an hour, that the truth of the gospel might continue with you" (Galatians 2:5). Paul wrote, "And have no fellowship with the unfruitful works of darkness, but rather expose them" (Ephesians 5:11). The New Testament occasionally exposed false teachers by name and the error they tried to teach (II Timothy 2:16-18).

The language of the early preachers was similar to that of Jesus in Matthew 23. Stephen called the Jews he was addressing "stiffnecked and uncircumcised in heart and ears" and "betrayers and murderers" (Acts 7:51-52). The apostle Paul said of Elymas, "O full of all deceit and all fraud, you son of the devil, you enemy of all righteousness, will you not cease perverting the straight ways of the Lord?" (Acts 13:10). He referred to the false teachers who would come into the church at Ephesus as "savage wolves" (Acts 20:29). James called some of his readers "adulterers and adulteresses," "sinners" and "double-minded" (James 4:1-10). Truth should never be given equal weight with error, and the faithful Christian will never tolerate that which opposed to truth.

Jesus Was Confrontational Toward Those Who Knew The Truth But Rejected It. Jesus intentionally provoked the religious leaders of His day. Often the controversy was related to the Sabbath (Mark 3:1-6; Luke 13:10-17). In Luke 14:1-6 we read, "Now it happened, as He went into the house of one of the rulers of the Pharisees to eat bread on the Sabbath, that they watched Him closely. And behold, there was a certain man before Him who had dropsy. And Jesus, answering, spoke to the lawyers and Pharisees, saying, ‘Is it lawful to heal on the Sabbath?’ But they kept silent. And He took him and healed him, and let him go. Then He answered them, saying, ‘Which of you, having a donkey or an ox that has fallen into a pit, will not immediately pull him out on the Sabbath day?’ And they could not answer Him regarding these things."

Jesus also confronted people with the fact that He was deity. After healing a man on the Sabbath we read, "For this reason the Jews persecuted Jesus, and sought to kill Him, because He had done these things on the Sabbath. But Jesus answered them, ‘My Father has been working until now, and I have been working.’ Therefore the Jews sought all the more to kill Him, because He not only broke the Sabbath, but also said that God was His Father, making Himself equal with God." (John 5:16-18). On another occasion we read, "Jesus said to them, ‘Most assuredly, I say to you, before Abraham was, I AM.’ Then they took up stones to throw at Him; but Jesus hid Himself and went out of the temple, going through the midst of them, and so passed by" (John 8:58-29).

Preachers in the early church were just as confrontational. After being arrested and released the apostles went right back into the temple preaching the truth (Acts 5:29) contrary to what they had been commanded. To describe Stephen’s sermon (Acts 7) as non-confrontational is to not have a clear grip on reality. When Peter separated himself from Gentile Christians Paul wrote, "Now when Peter had come to Antioch, I withstood him to his face, because he was to be blamed; for before certain men came from James, he would eat with the Gentiles; but when they came, he withdrew and separated himself, fearing those who were of the circumcision" (Galatians 2:11-12).

Jesus Excluded Many By His Teaching. It is not that Jesus wants to exclude anyone from salvation. As already stated His offer of forgiveness is extended to all men. But He will exclude those who reject His teachings. Yes, even those who claim to be His disciples. "Therefore many of His disciples, when they heard this, said, ‘This is a hard saying; who can understand it?’ When Jesus knew in Himself that His disciples complained about this, He said to them, ‘Does this offend you? What then if you should see the Son of Man ascend where He was before? It is the Spirit who gives life; the flesh profits nothing. The words that I speak to you are spirit, and they are life. But there are some of you who do not believe.’ For Jesus knew from the beginning who they were who did not believe, and who would betray Him. And He said, ‘Therefore I have said to you that no one can come to Me unless it has been granted to him by My Father.’ From that time many of His disciples went back and walked with Him no more." (John 6:60-66). Jesus recognized that His words were offensive. His follow up comments offended them further. He knew that many of His disciples would no longer follow Him, so why did He say what He did? To exclude those would not accept His difficult teachings.

Jesus Advocated A Culture Of Obedience

Listen to His words: "He who has My commandments and keeps them, it is he who loves Me. And he who loves Me will be loved by My Father, and I will love him and manifest Myself to him" (John 14:21). "My sheep hear My voice, and I know them, and they follow Me. And I give them eternal life, and they shall never perish; neither shall anyone snatch them out of My hand." (John 10:27-28).